Evolution is the study of change over time. When you hear ‘evolution’ maybe you think of Darwin and natural selection, perhaps you think of apes, perhaps you think of cavemen and hunter-gatherers. Even though the study of evolution draws focus on ancient times, evolution continues to impact the modern humans of today. For example, evolution has equipped humans with biologically prepared fears. Biologically prepared fears are specific situations or stimuli that humans are more likely to fear because this was advantageous for survival or reproduction in ancient humans.

Although stereotypical predators are often the first thought that comes to mind, biologically prepared fears encompass much more than avoidance of hungry beasts. Evolution has supplied the modern human with a plethora of biologically prepared fears unrelated to predator avoidance. Could you imagine anxiety being adaptive? It turns out your friend who’s afraid of roller coasters may be more evolutionally ‘fit’ than you think. And who would have thought a fear of plants might be beneficial? This article will describe a few common fears with unexpected evolutionary origins and explain how these fears functioned in the ancient human as an asset for survival or reproduction.

Fear of the Ferocious

So what might the ancient humans benefit from avoiding? Lions, tigers, and bears- oh my! Fear of predators protected ancient humans from the dangers of sharp teeth and powerful claws. This adaptive mechanism encouraged humans to behave in a way that would keep them safe and alive, such as hunting in groups and seeking cover come nightfall. This is why poisonous spiders and venomous snakes are among some of the most common fears today. Even though humans now live indoors and have access to extensive modern medical care, our species evolved to avoid anything that would be detrimental to survival. So although the threat of these creatures has lessened in the 21st century, historically humans have benefited from fear and avoidance of this threat, so this fear is likely to continue until it is no longer beneficial.

Avoidance of predators served as a survival mechanism of ancient humans, but today we live in a world of much less predatorial danger. Although we do not encounter lions and tigers as often as we used to, evolution has still prepared us with some mechanisms for survival, such as anxiety. Anxiety is a specific fear response in humans that entails restlessness, sweating, hypervigilance, and rapid heartbeat. Comparative research of animals such as ground squirrels shows similar anxiety responses to humans. This mechanism in animals results in decreased feeding behavior, decreased exploration behavior, and increased vigilance of surroundings. Therefore anxiety responses in animals are likely related to “detecting and dealing with threats to survival.” Anxiety is an adaptive mechanism that prepared humans to detect and respond to predators and other dangers. Anxiety allows us to recognize threats by making us hypersensitive to the environment and sensory input but also increases the heart rate to prepare for fight-or-flight. For instance, anxiety is more common in women than in men, possibly because ancient women experienced greater vulnerability to threats. In addition, anxiety is also associated with being alone since humans often traveled and lived in large groups for protection. Without protection from family or mates, the survival of vulnerable women and children may be threatened. These adaptations have evolved into something more commonly known today as stranger anxiety, which would have protected ancient humans from engaging with unfamiliar or threatening rivals. Likewise, the modern fear of public speaking can be traced back to social anxiety, rooted in the evolutionary consequences of reputational failure and ostracism which would result in loss of resources, mate access, and possibly survival. Overall, anxiety is more adaptive than one might think. your sweaty palms and racing thoughts stem from a successful evolutionary mechanism, promoting survival and reproduction. Who knew anxiety was an evolutionary superpower?

Have you ever felt anxiety when being on a rollercoaster? Does your stomach ever feels as if it is dropping? What about even when you are looking over the edge of a mountain lookout, have you ever felt queasy, maybe a sense of panic? This is very common when talking about the fear of heights. Fear, in general, is an adaptive feature that is to protect us; it is natural. This makes the fear of height reasonable as it protected our previous ancestors, which is why we are even here today- they did not fall from very high places leaving them to survive. An excellent study done to show that some fears in general, heights for example, are built-in/adapted and not learned over time is the “visual cliff paradigm,” which has been redone many times since the original. First off, you are probably wondering, “What is the visual cliff paradigm?” It is a test given to infants to see if they have developed depth perception. 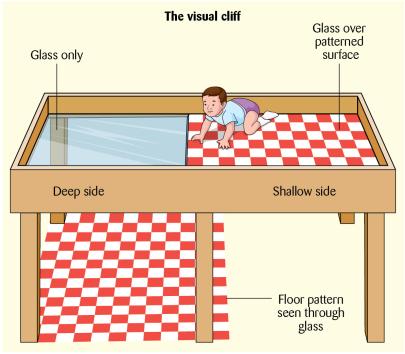 Now it is not an actual drop! No babies were harmed in the making of the studies! It is just an apparent (not actual) drop from one surface to another- as seen in the photo below. Glass over the patterned surface is not only over the patterned surface, but the other side as well- glass only, keeping the infant on the same surface type. This is there to lead the child to see the floor pattern seen through glass which makes the infant believe there is/is not a drop depending on depth perception. The deep side and shallow side differ in the way that the pattern is place, the deep side is to show a drop effect.

The visual cliff was done in different ways safely, and to make things sweet and simple, the infants did avoid going across specific setups of a height that showed a dip of elevation. Showing avoidance and not proceeding in something shows a fear, fear of heights in this instance. Yes, the infants continued once they knew it was safe, but they still had anxiety when they crossed because they were unsure of what could happen. There also was an averse feeling to the visual cliff when the infant could start walking compared to when they were only crawling. Overall, the infants did not have a fear of heights because they had fallen, but they did not fall as they had this perceived fear, to begin with. The visual cliff paradigm has been tested with other species such as rats and goats.

What specific features cause this fear, you may ask? Noticing the depth of height, the danger it brings to mind creating the uneasiness/queasy or the panic, what it could do to you fatally. Another specific cause for this is simple; it is for survival reasons, as said before! Nobody wants to fall to their death, so there are precautions that go into place in the mind to avoid this from happening. Next time you are on a rollercoaster and you feel like your stomach is in your throat just know that it is valid!

Going back to the whole phobia ordeal tends to put a damper into saying fear of heights is adaptive. It isn’t necessarily learned. Reasons being that can obtain the fear over time, later in life. People can be screened for this phobia in using the symptom checklist. This being a fear that is gained over time can go back to a person falling, watching someone else fall, or just having an overall negative experience in a high place. However, evolved navigation theory also can prove that the fear of heights comes from adaptation as it talks about the perception of height, which can reduce the likelihood of you falling.

You know how babies like to put anything and everything in their mouths? Well, they don’t like plants. Yes, kids really don’t want to eat their veggies, and they’re not overreacting either. Infants help reveal the biologically prepared fear of plants. Plants contain defense mechanisms such as toxins and spines to prevent predators from eating or damaging them. Studies with infants conducted by Wertz and Wynn reveal interesting behavior exhibited exclusively towards plants. Infants (between 8- and 18-months) will, more likely than not, avoid touching a plant entirely and look for cues that a plant is safe to touch. In the study, researchers controlled for appearance between a plant, an artificial plant, and a constructed object with plant-like features. A second run of the study was done with shells, everyday household items, and other objects like the previous trial. Wertz and Wynn found that the infants took longer to touch the plant and artificial plant over the object or refrained from contact entirely.  The infants also took longer to touch the plant-like objects over the shells and everyday items. The results of the study point to something about the appearance of plants specifically triggering an alert in the mind of a child.

But Wertz and Wynn weren’t done there. Later that year they examined infants’ (between 6- and 18-months) learning about fruit edibility. Because the infants looked for social cues in the last study, the researchers had good reason to believe that they would pick up information regarding fruit. They ran tests to see how infants distinguished between a fruit’s usefulness and edibility. Experimenters would get the baby’s attention, turn toward a plant with dried fruit and eat the fruit and then to a plant-like creation and move the fruit behind the ear, before placing it back down. All actions in the experiment were balanced for which was done first. Follow-up trials used no cue of edibility, a violation of expectation, and familiar objects instead of creations. Infants were still able to identify plants specifically as edible, but only if a cue to edibility was given, and took longer to eat the fruit if they witnessed the artifact’s fruit is edible.

Wertz and Wynn’s research points to the evolutionarily acquired responses, or lack thereof, to plants and their fruit. Infants do grow out of this though, unless you’re Christina Ricci (sorry, Christina). We are all unconditioned to reasonably fear plants specifically until conditioned to believe plants are safe or learn how to differentiate which ones are and are not. On the bright side, fear of plants is a rarely seen irrational fear that could easily be treated. Most of us like plants now though. Possible future research is already being done to decrypt the nature of how babies learn their way out of this phobia. In a paper published earlier in 2019, Dr. Wynn discussed that infants learn about the properties of plants through observation. The children would look to the adults in the room to see what they thought about the plant, before making contact with it, and often times not making contact when no information was obtained.

Something Beyond Your Worst Fear

People have a lot of fears! Whether it’s snakes and spiders, heights or plants, whole milk, or wheat bread, everyone is scared of something. Except for the guy who says he isn’t frightened of anything, but I’m afraid of him. So much work has been done on helping people get over their irrational fears over the past few decades. In fact, Dr. Lars-Göran Öst has found a method of exposure therapy that enables people suffering from specific phobias to move past them in only three hours! It’s ironic that to get over an irrational fear of something you almost never encounter, you will likely have to be exposed to that something far more than you would have ever liked. It sounds scary, but the point of this therapy to show you just how brave you can be. Our phobias developed to keep us safe, not to limit us. Imagine all the little fears we have holding us back, and now imagine if we were all brave enough to act without the restraint of fear. That is real power. END_OF_DOCUMENT_TOKEN_TO_BE_REPLACED